From the infamous 2007 interview with Dartoid:


Firstly Dartoid, I must say that although I have adopted the nickname Dave ‘Boy’ Green I am not the boxer. The nickname itself was given to me back in 2000 by several players who played within Oxfordshire after some banter between myself and other players. I have always had great belief in my ability and show a lot of aggression and am a very confident player – maybe I should have taken up boxing!!

It was a player named Jimmy Jukes who was the first of many players to call me Dave ‘Boy’ Green after an incident at the Super League finals night when he handed my pairs partner an envelope inviting him to play in a grand prix tournament. On asking my pairs partner what it was for I was quickly told by Jimmy that it didn’t matter to me as I was not good enough to play in it. Of course me being me, I had to have my say and quickly told Jimmy exactly how good I was in a manner of speaking!!

The following day was the play offs for the Friday Night League Singles in Oxford. With four venues and only one winner advancing from each I took the opportunity to back up my words from the night before and won through to the semi finals without losing a single leg of darts on the night. The following Tuesday I had a league match and soon spotted Jimmy at the bar of the venue I was playing at. On ordering a drink I heard him as he was reading the paperwork for the Friday Night Singles finals night say, “Who’s this Dave Green cunt?”

Straight away I pulled him on this and offered to play him for 200 pounds there and then. He managed to get an offer of a loan for the money but unfortunately the game was halted before the start and I was handed a warning for gambling on the premises.

This then brought us to Friday night again, the 11th August 2000, playing for the Cricketer’s Arms in Cowley Oxford, one to nil up in my singles match. Jimmy enters the pub, asking me if he could have a word with me I promptly told him to wait until I had won my game. After doing so he handed me an envelope with Dave ‘Boy’ Green wrote on the front of it. On opening it I was stunned to see an invite to Jimmy’s Grand Prix tournament, so shocked so that I tore it in two and threw it at his feet.

A week later was the Friday night league finals night which I played my semi final and won 2-0. Then lo and behold I had to play Jimmy in the final. If I am 100% honest and if those who saw the game are as well, I will say that I destroyed Jimmy and never gave him a dart at a winning double in any leg. It was a great night for me winning a tournament from start to finish without dropping a leg throughout but I have to say that without the anger and determination to get one over on Jimmy I would not have won as convincingly and without the bad blood between the two of us I wouldn’t have the nickname Dave ‘Boy’ Green. 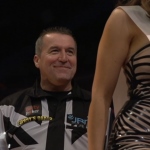 That never gets old

Return to “Double In”

Jump to
Who is online
Users browsing this forum: No registered users and 2 guests